An outstanding rare 1976 uncirculated $2 bill in perfect crisp condition, boldly signed in gold pen by The Greatest “Muhammad Ali”. Accompanied by GAI Certificate of Authenticity, stored and sealed in a protective clear cover. Three-time World Heavyweight Champion. To date, he remains the only man to have won the linear heavyweight championship three times (the linear title is recognized by tracing an – almost – unbroken lineage of titleholders going back over 100 years, with nearly every champion defeating the previous titleholder in the ring). Ali was known for his fighting style, which he described as “Float like a butterfly, sting like a bee”. Throughout his career Ali made a name for himself with great hand speed, as well as swift feet and taunting tactics. 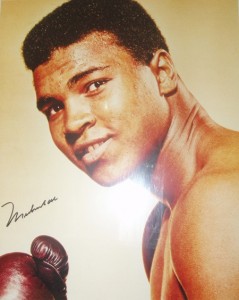