FAMILY BACKGROUND: Victoria was born fifth among seven children to Reuben Buckman (“Buck”) Claflin and Roxanna (Hummel) Claflin. Buck was a gristmill operator, but had a get-rich-quick streak that led him to gambling, scheming and lawsuits. Roxanna was fiery tempered, quick-witted and inclined toward clairvoyance. She brought her children often to camp revivals in the woods by traveling preachers, especially Rev. Lyman Beecher (father of Victoria’s later adversary), and would get caught up in religious ecstasy, whirling and speaking in tongues.

ACCOMPLISHMENTS:  Victoria inherited much of her mother’s fiery personality, and was imitating preachers at a young age. She also showed signs of clairvoyance. At the age of 10, Victoria had visions in which Demosthenes (a prominent Greek statesman and orator of 4th century Athens) appeared as her patron saint. Her sister Tennessee (“Tennie”) also shared the gift of “second sight.” Their father saw his opportunity,  changing his name to “Dr. R.B. Claflin, American King of Cancers,” and taking his daughters on the road as psychic healers, and holding seances, complete with rapping sounds and moving furniture. She spent most of her youth traveling with her family’s medicine show, telling fortunes, selling patent medicines, and performing a spiritualist act with her sister Tennessee.

ALL FOUR OF THESE ITEMS ARE ORIGINAL AUTHENTIC PIECES OF MEMORABILIA OF THEIR TIME PERIOD, EACH PIECE IS IN EXCELLENT CONDITION AND GUARANTEED 100% AUTHENTIC.

8 X 10 BLACK AND WHITE PLAYMATE OF THE YEAR 1993 PHOTO, IT IS IN MINT CONDITION.
THIS IS ACCOMPANIED WITH A COA CERTIFICATE OF AUTHENTICITY FROM TRISH HESSEY AUTOGRAPHS AND IS GUARANTEED FOR LIFE.
THIS IS NOT A REPRINT, WE ONLY SELL REAL MEMORABILIA and REAL AUTOGRAPHS! 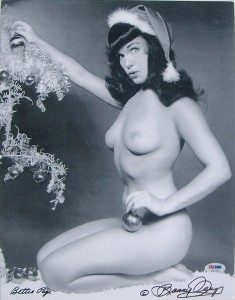