Dorothy Dalton (September 22, 1893 – April 13, 1972) was an American silent film actress and stage personality who worked her way from a stock company to a movie career. Beginning in 1910, Dalton was a player in stock companies in Chicago and Holyoke, Massachusetts. She joined the Keith-Albee-Orpheum Corporation vaudeville circuits. By 1914 she was in Hollywood. 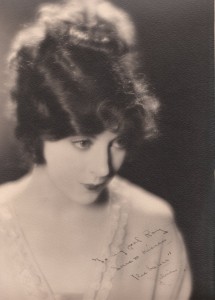 MATTE FINISH WITH A RAISED TEXTURE THAT CAN BE SEEN IN SOME OF THE PICTURES PROVIDED, OVERALL EXCELLENT CONDITION AND MEASURES APPROXIMATELY 10-1/2 INCHES BY 13-1/4 INCHES ON VERY STURDY AND HEAVY PAPER.

Early life and career
Born Jobyna Lancaster Ralston in South Pittsburg, Tennessee in 1900 to parents who named her after famed entertainer of the time, Jobyna Howland. Jobyna’s mother, a portrait photographer, carefully groomed her daughter for a show business career.

At the age of nine she gave her first stage performance in Cinderella during the grand opening of the Wilson theatre/Opera House in 1909. Around 1915, Jobyna attended acting school in New York. She later danced chorus and sang in Broadway productions, her first being Two Little Girls In Blue. This production marked her Broadway debut, when she was 21. Comedian Max Linder saw her on stage and persuaded her to go to Hollywood, where Jobyna appeared in a number of his films. She also co-starred in Humor Risk (1921), the fabled lost comedy short film that was to be the film debut of the Marx Brothers. Soon director Hal Roach began to star the actress in one-reel comedies. She abandoned the stage for the screen in 1922 when her mother’s health began to decline, and she needed to make more money to help pay the medical bills.

Starring with Harold Lloyd
In 1923 she was named by the film industry as one of the WAMPAS Baby Stars. This award was given every year to the top up and coming female stars. This same year she starred with silent comedian Harold Lloyd in Why Worry?, and for the next five years appeared in six of Lloyd’s feature films as his leading lady. Ralston brought both genuine emotional depth and comedic talent to these films. It is for these performances and her onscreen chemistry with Lloyd that she is best remembered today. She would start the trend for romantic comedies with Girl Shy. The chemistry of that film is unmatched.

Silent film career
As a freelance actress, Jobyna co-starred with Richard Arlen, in the first Oscar-winning film, Wings (1927). She had a feature role in a film which also featured Clara Bow, Gary Cooper, and Buddy Rogers. She would star in eleven more motion pictures, among them Special Delivery (1927) co-starring Eddie Cantor. Her film career ended after two early talkies when Jobyna became a mother. Her last talkie, Rough Waters (1930), found her acting with Rin Tin Tin.

Personal life
Jobyna was married twice. The first time was to her childhood beau John Campbell, but the marriage did not last. She married actor Richard Arlen in 1927, who she had met on the set of Wings. They had one child, actor Richard Arlen Jr.. Ralston and Arlen divorced in 1945. She spent the last five years of her life suffering from rheumatism and had a series of strokes. She died in 1967 from pneumonia at the Motion Picture Country Home in Woodland Hills, Los Angeles, California. She was 67 years old.